I went to the Microsoft Surface Demo at the Sheraton in NYC.  I was first in line at 9:30am.  It was a neat event.  There were three MS Surfaces on hand for some extremely controlled tire kicking.  There were no (positive) surprises about features and functionality.  The good news is that the Surface was able to do everything that was shown in the Launch videos.  The bad news is that it couldn’t do much more than that, and there were a few gotcha’s.  I’ve got all the dirt below.

The Microsoft Surface Demo Event at the Sheraton was scheduled for 10AM.  NYPD barricades were set up wrapping around the side of the building on 53rd St.  I was first in line at 9:30.  A few others joined the line by 10AM, but the throngs of geeks didn’t show up.  There were no more than 50 people watching the demo, and many were hotel guests.  The main demo was conducted by Jeff Gattis of Microsoft.  (Jeff can be seen in this Popular Mechanics demo of the Surface.)  Jeff went through the different features such as Pictures, Puzzle, Music, drink ordering (Concierge?), and Paint.  I’m proud to say that I was the first person I know to crash the Surface.

Jeff from Microsoft launched the Puzzle feature that uses the clear tiles.  This feature basically illuminates the surface under the location of each of the tiles to create a puzzle effect.  I took a picture with flash and the whole thing locked up.  Jeff did something to the screen that reset it.  The Surface software ran slowly after that.

I also uncovered some of Microsoft’s smoke and mirrors.  Microsoft’s launch video show’s that you can place a Zune on the Surface which will automatically interact with the Surface and other Zunes.  This feature DID NOT work as advertised.  I borrowed a Zune from a friend to test this feature.  Jeff launched the Music app and placed his Zune on the Surface.  He copied music to the Zune.  I whipped out my Zune and placed it on the Surface and nothing happened.  This is when I was told that it’s not going to work because I didn’t have an ID tag on my Zune.  (BTW, Jeff was “very impressed” that I had a Zune.)  It turns out that every Zune, cell phone, glass, credit card, and comp card used for the demo had a special tag affixed to it.  I got a picture of the tag which you can see here:

There was also another incident where a Surface bug was exposed.  The Surface seems to have a problem with drastic direct changes of lighting.  Someone was using the Paint program.  They began drawing on the screen.  Someone else took a picture with flash.  The corner of the screen that was hit by the flash lit up solid green as if someone had “painted” it.  Thankfully the unit didn’t lock up this time.

The only other item of interest from the demo was a quick Q&A between Jeff from Microsoft and one of the attendees.  The attendee asked Jeff if he was familiar with Jeff Han’s work.  Jeff from MS said that he was and that he’s “very impressed” by it.  He said that a few guys at MS Research know Jeff Han, but that Jeff Han isn’t working on the Surface project.

The ultimate question is whether it was worth waking up at 7AM on a Saturday to see the Surface in action.  I’d say yes.  Microsoft’s Surface is an early example of the more interactive computer interfaces that we’ll see in the future.  The Surface is barely capable of performing its demonstrated functions.  The greatest disappointment is that Zune’s and camera’s need to be tagged before they could interact with the Surface.  Jeff from MS claims that this will be fixed and seamless interaction is down the road.  I hope he’s right.

Check out the pictures and let me know what you think!

Notice the tag on the bottom of the glass.

Buying a phone from T-Mobile.

I had the misfortune of helping someone install this yesterday.  The install is painfully long, but I’ll save that for another post.  Anyway, the installer includes a slideshow of people listening to Zune’s and just hanging out.  One of those pictures is of a young girl laying on a young guy.  In that picture you can see clear up her nose.  And what’s up her nose?  Some hair and a big BOOGER.  See for yourself: 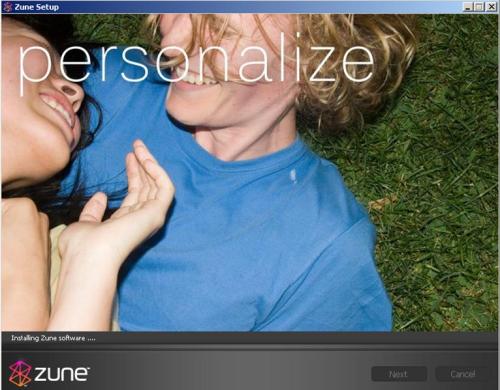 Today I was tasked with testing a Microsoft Zune prior to installation for one of our users.  It’s the first time I have gotten intimate with one.  The Zune was a neat looking little brown device.  It has a nice size screen and the interface is ultra-simplistic.

So I begin to test it.  I used the first spare machine I could find to test it.  I insert the CD and the Zune software tells me that there is a problem with the device “or Windows.”  I checked the machine and what do I find?  It’s an XP SP1 machine.  Then I get my hands on another machine that I knew had SP2.  The software begins to install.  It starts by downloading and installing updates.  That goes well (though quite slow).  Then it begins to download “firmware.”  The “Downloading firmware” message stays at 0% for several minutes before I cancelled the install and tried again.  I had the same problem when I tried again.

I suspected it was some sort of weird networking issue, so I tried the install on a machine outside the firewall.  This works!  At that point I was pretty confident it was some sort of blocked port.  My coworker suggests installing a program called “Active Ports” to the machine and trying the install again.  When I did this, I saw that the Zune software was attempting to communicate over port 3074.  This is only during the firmware update.  It works properly when it updates it’s own software.  I looked up the port number and found out that it is the “XBOX Game Port.”

Now why the hell would Microsoft do that?  Why does the firmware need to be transported using port 3074?  I can’t understand it.